Why Do So Many Atheist Book Reviewers Want to Display Such Ignorance? 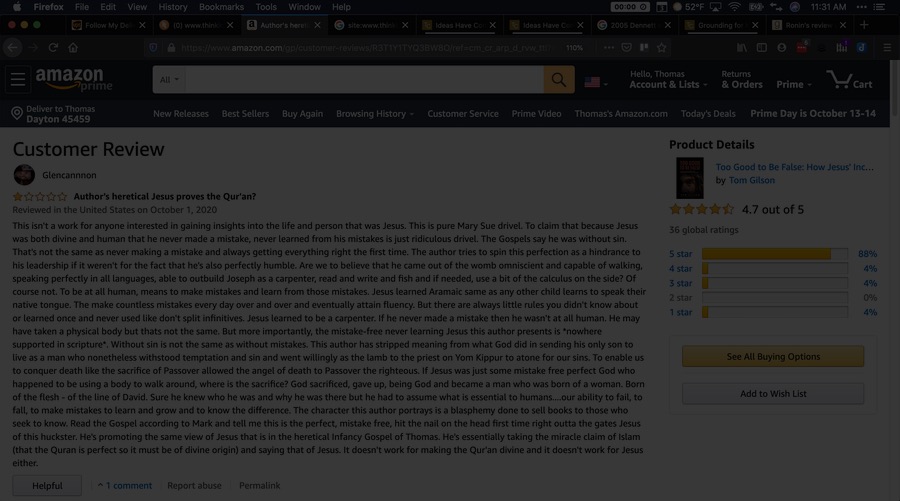 Too Good to be False received its first negative review on Amazon today. It’s exactly as I’d expected. I knew, based on prior experience, that there would be 1-star reviews coming, and I figured they’d be mostly from people who hadn’t read the book. I was right this time, at least.

Why do they do it, though? Sure, it’s anonymous, which makes it safe. Still, I wonder why do want to put such ignorance on display?

This one’s remarkable, really. The reviewer, Glencannon, makes a truly impressive number of wrong guesses about what’s in the book. (I listed several of them in a comment under his review.) He says, for example,

Are we to believe that he came out of the womb omniscient and capable of walking, speaking perfectly in all languages, able to outbuild Joseph as a carpenter, read and write and fish and if needed, use a bit of the calculus on the side? … Jesus learned to be a carpenter. If he never made a mistake then he wasn’t at all human.

I can easily imagine him learning from error in Joseph’s shop: “Now, Jesus, do you see the lesson you’ve just learned? Measure twice, cut once!” The Bible doesn’t say he never made a mistake, only that he never made any moral, ethical, spiritual, or even relational mistakes. He never committed sin, in other words, and he never missed the truth when he spoke. He might have learned to be a better craftsman as he was growing up, but that’s not the kind of growth we’re talking about here.

Glencannon doesn’t seem to have read that. He hadn’t read the book at all, as evidenced by all the other mistakes he made about what’s in it.

It’s remarkable, too, how freely he accuses me of heresy and blasphemy in contrast to dozens of previous very positive reviews, including three from evangelical seminary-designated distinguished professors.

He wasn’t just criticizing me, you see. He was taking stand against every one of them, too. In the vehemence of his criticism, it’s as if he were shouting at them all: “You’re wrong! All of you! You’re idiots, every one of you!”

That takes chutzpah. Either that, or else he holds every one of them in as much contempt as he does me. He doesn’t bother even noticing their opinions. Why? Because he doesn’t think they’re worth listening to.

Remarkable, But Not Unexpected

It’s all remarkable — remarkably foolish. I was expecting it, though. I’m not basing this on a sample of just one review. I’ve seen it, even studied it before. It was ten years ago, a few months after Stephen C. Meyer published his landmark Intelligent Design book Signature in the Cell. I watched the reviews growing on Amazon until there were about 200 of them. Then I did a statistical study on them.

Six out of seven negative reviews used highly pejorative personal insults, calling Meyer “stupid” or worse. Again, most of these were written by people who hadn’t thought it necessary to read the book.

That’s just one example of many, the one I happen to have studied in depth.

As often as I’ve seen it, though, I still can’t help wondering why a person would make such a brash display of his own ignorance. I’m going to make some guesses of my own on that — though unlike Glencannon, I’ll be very clear that they’re just tentative. First, though I’ll list some inferences that should be completely safe.

So let’s draw some tentative conclusions from this. Focus now on the last two bullet points. There is exactly one place where that kind of thing works: in echo chambers, including comment sections under atheist videos and blog posts.

I haven’t bothered reading many of the comments under Paulogia’s video, but the few that I did read were enough to show that Paulogia’s tribe was more than willing to jump to conclusions without caring to know what they were talking about. Others would affirm them in those ignorant conclusions. There’s enough mutual back-slapping there, it’s very believable that one could think one knew much more than one actually does know.

It wouldn’t surprise me at all, therefore, if Glencannon’s Amazon review echoed much of that discussion. If I’m right about that, then he might have been oblivious to his ignorance. He’d have had plenty of social support for thinking he was right. Why bother to check facts, when everyone around you already agrees with you?

Glencannon obviously thought it was important to write an incredibly critical review. He follows in the footsteps of many who’ve done the same thing in reviewing Stephen C. Meyer and other theists.

This smacks of defensiveness. If he’d delivered a knowledgeable criticism, I’d have taken it as legitimate disagreement, but he didn’t do that. This looks more like the sort of pre-emptive strike that people send willy-nilly, out of either anger or fear.

Third Conclusion — Not Tentative This Time

And I’m okay with that. You might ask if I’m defensive myself. I posted a comment under Glencannon’s review, correcting several of his errors. Was that defensive? No, it was making a defense. Giving an answer. Correcting plain, blatant error. There’s a difference between that and emotional defensiveness. I wrote the book to say one thing, so obviously I don’t want people thinking it says exactly the opposite. That kind of confusion does no one any good, not even Glencannon.

Otherwise I’m taking it in stride, feeling rather serene, actually. I’ve been expecting this. He’s done me a favor, really: He wants to hurt book sales, but he’s given me another occasion to talk about the book in public. I won’t be surprised if he’s done his cause more harm than good.

“Blessed are you when others revile you and persecute you and utter all kinds of evil against you falsely on my account. Rejoice and be glad, for your reward is great in heaven, for so they persecuted the prophets who were before you.”

P.S. I’m planning soon to address the charge that my argument is the same as the Muslims’ argument for the Qur’an. Stay tuned.