An Open Letter to Spencer Hawkins re: Contra Christian Apologetics 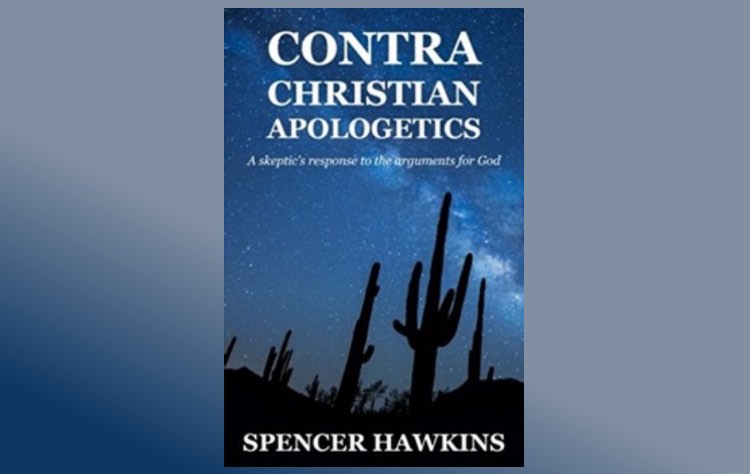 I didn’t set out to write two open letters in a row here, but I was thinking of emailing Spencer Hawkins about his book Contra Christian Apologetics: A Skeptic’s response to the arguments for God, and then decided instead to post it here.

Thank you again for sending me a copy of Contra Christian Apologetics. I’ve enjoyed our online interactions, and I certainly appreciate the tone you set in the introduction to your book. I am quite sure that, unlike some other skeptics I’ve interacted with recently, your desire is to represent Christians’ beliefs fairly and to handle the arguments with an open mind.

Regarding the Argument From Reason

When I read your quick dismissal of Rice Broocks’s treatment of the argument from reason (your chapter titled “Proof Number One”) I thought maybe you had missed your own objective. You quoted Broocks (in his book God’s Not Dead),

God must necessarily exist in order for atheists not to believe in Him. There is no other explanation for the capacity to reason (even poorly). Atheism and naturalism can’t account for reason.

You said, “One would think a claim as extraordinary as this would require a defense; however, Broocks doesn’t offer one.” When I looked it up in Rice Broocks’s book God’s Not Dead, however, I found that he indeed hadn’t said much at all in support of that assertion. I think it’s because this isn’t by itself one of his “Nine Key Proofs,” as you say it is, but is instead part of an extended chapter dealing with the reason science and Christianity are friends, not enemies.

But you’re right: he made a bold assertion with little explanation, merely nodding at the idea that evolution would have difficulty producing reasoning abilities in humans. You go on to explain how you think that was likely possible after all. But then you get to the point I wanted most to write about. It’s on page 8 in your book:

Upon reading Broocks’ arguments, however, one gets the impression that scientists and philosophers haven’t given this question much consideration and that there are no noteworthy attempts at providing an answer.

I want to consider that especially in light of your book’s title, which positions the book as being rather unrestrictedly and unqualifiedly contra Christian apologetics, as if you were dealing the field as a whole. You speak of responding to the arguments for God.

What I would like you to know is that in this chapter you have written contra Rice Broocks, not Christian apologetics as a whole, and only just barely in his case (for I know if he had intended to, he could have set out a much more extended version of this argument than he did).

You’ve actually presented an impression of your own: that you are answering the argument from reason by answering it in Broocks’s highly compressed formulation. The fact is, however, scientists and philosophers have dealt with this at great length.

A Shorter and More Accessible Version of Plantinga’s Argument

An Evolutionary Argument Against Naturalism

I include these blog posts just for the sake of convenience — they’re easier to get to than the books I listed.

Broocks was in fact summarizing arguments with a long history of discussion behind them. I’m sure you could find a good deal more robust discussion on this if you look for it. This is one example of your drawing conclusions without adequate awareness of the conversations surrounding the questions. Other examples are easy to find.

Other Issues and Examples

For example, it shouldn’t be too hard for you to find strong Christian defenses against the apparent Euthyphro problem (it’s a false dilemma).

If you look, you might be able to find someone who has already explained why there is no fatal equivocation on “cause” in the Kalam cosmological argument; and if you’re going to talk about both material and efficient causes (as you have done) you’d better also include final and formal causes to have a complete analysis.

If you look through the whole discussion you will see that although it’s true the atheist can posit a multiverse to explain our universe’s fine-tuning for life, that’s not much help if you’re committed to finding evidence for your beliefs or to Occam’s razor in any form at all. You would never dream of calling God’s work “wasteful” and “doltish” (p. 44); you might understand that he isn’t looking over his shoulder at bean-counters, and that he’s got a stake in “wasteful” things like beauty and glory (see here).

I could go on, but my purpose for writing isn’t to answer all your arguments. It isn’t even really my purpose to answer any of them — this post is far too brief for that — but rather to point out that you’ve run ahead of yourself in reaching unsupportable conclusions, not unlike what you’ve accused Broocks of doing.

Whether you’re more culpable regarding some sort of rational fault for that than he is, I don’t know and I don’t care. What matters is whether you yourself are willing to live with drawing so many unsupported and unsupportable conclusions as you’ve done. I think you’re aiming higher than that, and I encourage you to continue pushing toward the truth.

2 thoughts on “An Open Letter to Spencer Hawkins re: Contra Christian Apologetics”