Same-Sex Marriage In 2016: One More Reason the Question Still Matters

Defenders of marriage see the question still at issue for marriage, family, and religious freedom. They’re wrong too, if they think those are the big three. Yes, they’re right to place priority there, but if that’s all they see to work on they’re missing one other matter, equally important if not more so.

The gay marriage question wasn’t settled in 2015 — and the pundits are wrong — because more than a third of us are convinced the Supreme Court’s decision was wrong. We acknowledge that the court’s decision is in force. We just don’t think it’s good for it to stay that way. The year 2015 marks a turning point in how we address gay marriage, not whether we address it.

Our strategies going forward will resemble the approaches we’ve used to protect unborn lives since Roe v. Wade. On that front we’ve moved forward patiently, not expecting huge, quick wins, remaining content (not satisfied, but content) to see progress through consistent support for women and babies along with ongoing political and legal pressure.

I expect to see something similar with respect to marriage and family. The Church will continue its long-standing support through teaching, counseling, and mutual encouragement, delivered in myriad ways: sermons, classes, books, conferences, one-on-one sessions both formal and informal, and on and on. Winning this battle requires a vision for marriage, not just against same-sex marriage. We’ve known that and we’ve practiced it; now our strategies will reflect it more visibly than before.

Various jurisdictions have already been trying to enforce conformity of belief regarding LGBT matters. In the U.S., Christians’ best defense against this tyranny is still the First Amendment. Unfortunately activists have undermined its protections badly. Princeton students by the dozens were willing to sign petitions for its repeal. Residents of Indiana recently voiced their opinion that individuals’ sexual rights trump religious bodies’ First Amendment rights. University speech codes abound, sharply restricting so called anti-gay “hate speech.” Our liberties are under fire.

The fourth crucial issue raised through gay-marriage activism — the one that many marriage defenders missed — is the collateral damage the marriage battle has inflicted on Christianity’s moral reputation. Gay marriage activists have made themselves seem more Christian than marriage-defending Christians. They’ve done it mostly through rhetorical sleight-of-hand. For example:

I could go on. The point is, marriage revisionists have made Christianity look bad. They’ve done it illegitimately, but they’ve done effectively.

For the Glory of God

Their strategies have had a huge impact on the expression of God’s glory and goodness in the present age. If Christianity looks bad to some people, then since Christ is known in the world mostly through his body, the Church, to those people Jesus Christ himself looks bad. Now, that’s just wrong. Jesus is by far the greatest model of other-centered goodness, love, worship, faithfulness, and purity the world has ever known. I grieve at the thought of anyone not seeing him for who he is.

For Our Witness in the World…

When I was a student in the 1960s and 1970s few people doubted Christianity’s basic moral goodness. Their key questions then were, “Is it true?” and “Do I want it?” Those questions have now been pushed to the background. Considering Christianity’s new reputation of being unjust, reactionary, and unthinking, the first question is no longer, “Is it true?” It’s, “Why would I want to think about whether it’s true,  when so many people are telling me how rotten it is ?”

We need to be able to answer that question. Answers exist. For a long time now, marriage’s leading defenders have been explaining why natural (man-woman) marriage isn’t just some religious prejudice, it’s a good idea. It’s good in all the ways that matter: good for today’s society, good for today’s children, good for future generations, and good for married persons. At the same time these marriage defenders been refuting the idea that same-sex marriage is good, too, on similar terms.

… Especially To Our Own Children

It’s no longer enough, however, for marriage’s leading defenders to make that case. This isn’t just about whether the people or the courts or even TV producers will approve of same-sex marriage. It’s about whether our own children and grandchildren will approve of Christianity. The battle lines are clearly drawn, with conservative Christians (Evangelical, Pentecostal, Catholic, and Orthodox) on one side, same-sex marriage and its supporters on the other. To the extent that same-sex marriage looks good and right, Christianity looks evil and wrong. 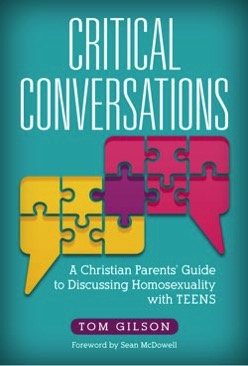 It looks evil and wrong to our own children, that is. It looks bad in other spheres, too, which will undoubtedly influence how things go for us on religious freedom. But we can’t ignore its impact on our own children. They’re the ones asking themselves and each other, “If Christianity is this bad, I’ll ride it out with my parents as long as I have to, but why would I even think of sticking with it when I leave home?”

It’s a real question. Its premise is completely false, but that doesn’t mean nobody is asking it. Church leaders and parents need to be equipped to answer. That’s why I’ve written Critical Conversations: A Christian Parent’s Guide to Discussing Homosexuality With Teens, due for release from Kregel Publications on February 27.

Along with that I recommend other excellent works by Sean McDowell and John Stonestreet, Anthony Esolen, Robert Reilly, and especially (if you have the patience to work through it), Girgis, Anderson, and George.

Marriage, the family, and religious freedom — three conceptually distinct yet intertwining and overlapping issues — are still at stake. Most of us have seen that much clearly enough since long before this year’s Supreme Court decision. We know it isn’t over with.

Many marriage defenders have missed a fourth intersecting issue: Christianity’s reputation is at stake, affecting our witness to God’s glory and the spiritual lives of future generations. We need to direct our efforts there as well.

The same-sex marriage question isn’t behind us. We must keep standing for marriage, the family, religious freedom, and the goodness of Christianity in 2016 and beyond.

103 thoughts on “Same-Sex Marriage In 2016: One More Reason the Question Still Matters”