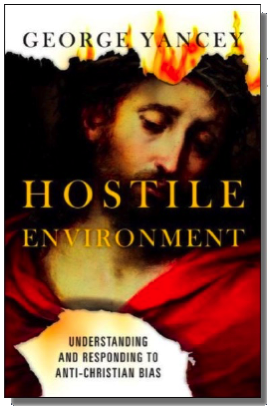 Some time ago I reviewed the book So Many Christians, So Few Lions, sociologist George Yancey’s academic report on anti-Christian hostility in the United States. Having had some social science training I found it fascinating. Since then Dr. Yancey has released a follow-up for the rest of us: Hostile Environment: Understanding and Responding to Anti-Christian Bias.

Plenty of books have been written about increasing anti-Christian hostility in the United States. Most are based in anecdotal information, lending themselves to guffaws of disbelief from skeptics claiming Christians are suffering little more than a long-deserved displacement from our position of cultural dominance. These books, being the product of careful and responsible sociological research, are different.

Is there anti-Christian bias in the United States? Yes, and it follows a revealing pattern. Yancey’s research methods did not allow him to estimate the proportion of Americans with anti-Christian bias, but they did permit him to discover that the demographic make-up of such bias is considerably more white, educated, wealthy, and male than America at large. The demographic profile of this bias is remarkably similar to the profile of America’s powerful elite.

In other words, anti-Christian bias may not be large in number but it still packs a punch.

This may come as little surprise to those of us who have observed bias in news and entertainment media, courts, and institutions of higher education (see also Yancey’s Compromising Scholarship: Religions and Political Bias in American Higher Education. Our anecdotal experiences may not be so far off base after all.

This bias is powerful in another way as well: it can be very powerfully venomous. Seeking to understand in just what ways anti-Christian hostility might be expressed, he asked persons identified with this hostility to respond to questionnaire items, and he explored blogs of known anti-Christians like members of the Freedom From Religion Foundation. Some samples of what he heard back from respondents or found on the Internet:

They are relentless, and I believe if we don’t stop them now, we will be living in another Nazi Germany.
Churches… should be absolutely forbidden to have any role in politics, including collecting money and espousing platforms. Churches should not be allowed to provide orphanages and adoption programs.

These comments display a distorted, ignorant view of Christians and our history of compassionate outreach. Perhaps that ignorance can be explained through comments such as:

They despise what they know not.

But Dr. Yancey did not write this book to support any sense of Christian paranoia. It’s about both understanding and responding to anti-Christian bias, and his response recommendations are even-tempered and wise:

Anti-Christian hostility is real. Understanding it accurately–not just anecdotally–is extremely helpful. That’s why I strongly recommend you read and digest this book (0r one or two of the others I’ve referred to here) — it’s the most thoughtfully accurate information you’ll find on the subject. It will sober you, it will lead you to prayer, and (I pray) it will lead you to find someone with anti-Christian bias to get to know and to love in the name of Christ.