To Make the Charge Stick (Reading Paul Copan Together)

The first chapter of Paul Copan’s Is God a Moral Monster raised very little reaction. It won’t always be that way in this Reading Paul Copan series.

I thought it might be helpful to do some advance work on what it would take to make the charge of God’s immorality stick. This flowchart presents a graphical view of what’s required to get there.

This should be useful in two ways. First, it helps us to name in advance some of the more likely fallacies to come up in this study, while also showing what’s required to reach a valid conclusion. I’ll be honest with you: I expect to see these fallacies showing up repeatedly, and I’m hoping this will make it less work to respond to them each time.

Second, if this chart is correct, it shows that there are only two possible ways to make a successful charge against God’s morality. One is to show that there is an internal contradiction in the Bible, where God’s actions at some point contradict his revealed character, and the contradiction is unresolvable. The other is to show that there is some robust, objective, extra-biblical ethical standard that God violates at some point in the Bible. The second one is unlikely, however, as it holds God accountable to standards imported from outside a biblical worldview.

Let’s take a closer look at all that. (Click the image for a larger view.) 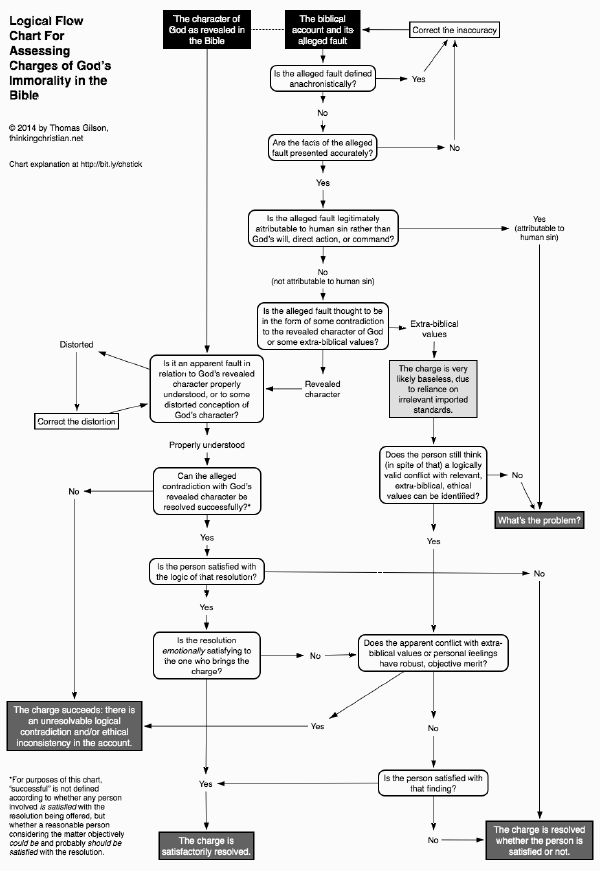 The chart begins at the top with an alleged moral fault in God as depicted in an account in the Bible, alongside God’s character as also revealed in the Bible. The first two stages are for making sure the fault is being described accurately. I made a separate step for anachronistic views because they arise so often.

This sets the stage for the first two named fallacies: Anachronism and Factual Inaccuracy.

Note that there’s no point in trying to draw conclusions until the facts are settled and everyone is talking about  the same view of God. The chart depicts a loop at both of those points, and there’s no legitimate way to exit that cycle until the facts have been straightened out.

Assuming all that’s in order, there are three possible outcomes (four, if you count “What’s the problem?”), and it’s important to understand what paths can reach them. On the lower left is the outcome then accuser is looking for: “The charge succeeds: there is an unresolvable logical contradiction/and or ethical problem in the account.”

There are only two ways to get there, and one of them is unlikely from the get-go. The first is by finding a contradiction between God’s revealed character in the Bible, and his actions recorded there. Moving down the left side of the chart we come to a juncture for ensuring we’re dealing with a correct conception of God’s revealed character, where for these purposes “correct” means in accordance with historic, creedal Christian doctrinal interpretations. (Skeptics may find some joy in disproving other conceptions of God; I’ll be happy to disprove the same thing right along with them.)

That leads to the next in our vocabulary of fallacies, the Wrong God Fallacy, previously encountered here.

Following that on the left side comes a juncture for a straightforward logical analysis of proposed contradictions. This could involve either valid logic or any number of fallacies, so I won’t pre-define any special vocabulary for use here. If the alleged contradiction sticks, then the charge succeeds, and God is found to be a contradictory concept.

The second route to making the charge stick is on the right side of the chart, and it’s the unlikely one. It won’t do to find some contradiction between God’s actions and some standard derived from a non-theistic source. If we’re to take the word “God” at all seriously, we have to conceive of him as conforming (by logical necessity) to his own character, not to 21st century Western liberal standards.

The next named fallacy for this study, then, is Irrelevant Imported Standards.

Still I’m willing to leave room for the accuser to press the possibility of some genuinely valid external standard, against which God is found guilty. It’s not unusual to see people attempting this ploy. “If there were a God, he would never allow capital punishment.” Why? “Because in today’s society we know it’s inhumane and unethical.”

That argument succeeds in showing that the God of the Bible is not one who abides by contemporary human standards. Christians already agree with that! (It’s actually another version of the Wrong God Fallacy.) Still, if by some unlikely chance that kind of objection were to be found to be valid and robustly so, then that, too could lead to a successful charge against God.

There is no other route to reach a successful moral charge against God. If any successful resolution is found to the charge on either of these paths, then the charge fails. “Successful,” for purposes of this chart, is not defined by whether any person involved is satisfied with the resolution being offered, but whether a reasonable person considering the matter objectively could be and probably should be satisfied with the resolution. It means roughly the same meaning that “sound” has in the context of deductive arguments.

That leaves open the real possibility that the parties involved will disagree over whether a resolution is successful. If all agree, then the charge is satisfactorily resolved. If the accuser is unsatisfied, whether for logical reasons or because, “It still just seems wrong or feels wrong to me!”—even though the resolution is successful, as defined here—then the resolution succeeds regardless. Sometimes discussions come out that way. Though I didn’t put it on the chart, it’s also logically possible for theists to be unsatisfied with an outcome where the charge sticks.

So in summary, we need to be cautious to describe the alleged fault accurately and non-anachronistically. We need to make sure it’s not based on irrelevant external standards or a wrong conception of who God is. We should strive to reach an agreement that satisfies all, but recognize that a sound or successful argument isn’t always going to be satisfactory to everyone.