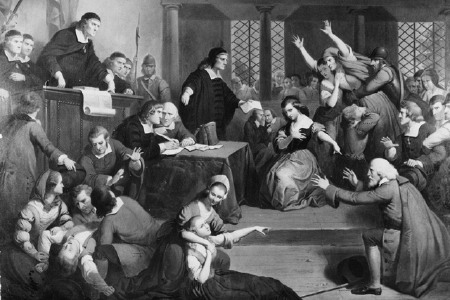 If the essence of witch-hunting is in its minute inquiry, condemnation, and eventual throttling of what is feared as supernatural, then there’s a witch-hunt going on today in the most unlikely of places: among atheists in academia.

The self-appointed magistrate in charge of this beady-eyed hunt for bewitchery is Dr. Jerry Coyne, professor of biology at the University of Chicago. Last April on his “Why Evolution Is True” blog he exposed an Honors course being taught by Dr. Eric Hedin at Ball State University on “Inquiries in Physical Sciences.”

(I didn’t comment on this matter at the time, but a related issue has come up recently that prompts me to speak up now. I’ll come back to that in a moment.)

The horror Dr. Coyne uncovered in Dr. Hedin’s course description was this: that certain features of the physical world and human existence would be examined as to whether they “may lie outside the naturalistic boundaries of science.” Worse yet, the course description goes on to say, “These will then be considered for their implications relating to the significance and value of human life, and as possible indications of the nature and existence of God.”

One agnostic student describes Dr. Hedin’s approach as purely “discussion-based,” with no hint of any professorial enchantments being laid upon unsuspecting students. He adds,

The professor poses an unbiased question for us students to debate, intelligently, I might add, and thus we further our understandings of the possibilities of the universe. The only time the professor even delves into the students’ debates is to refute any arguments that are just blatantly incorrect, do not consider all of the possibilities, or seem derogatory and opinionated in nature.

Nevertheless, like a judge in Salem the magistrate pounced. Though it was in a university far from his own, in a course covering sciences outside his own field, Dr. Coyne had found someone raising the possibility of the existence of the supernatural, and he sprang into action to cut it off. He mounted a blog campaign that resulted not only in this course being cancelled but a pronouncement being made by Ball State’s president, Jo Ann M. Gora, that no instructor in any science course could so much as broach the questions Dr. Hedin had raised.

That evil witch Eric Hedin had been exposed and executed: metaphorically, of course, yet disastrously enough for his reputation.

But the magistrate had not finished casting his eyes about for the next eruption of witchly deeds. “A few minutes of Googling” led Dr. Coyne to questions about a seminar at the University of Iowa, led by Dr. Ned Bowden, that “mixes science with God.” He doesn’t seem quite ready to call for fires to be lit around a stake, saying, “This whole thing smells fishy—fishy enough that I’ll try to get more information.” In the same blog post, however, and obviously before obtaining that additional information, he pronounces summary judgment that “Bowden is an embarrassment to his department and to the University of Iowa.”

If there are supernaturalists out there, they must be exposed for the embarrassment they are: and there’s no need to wait for more information to come in. So says the magistrate.

A word about Dr. Coyne in his self-chosen adjudicatory role is in order here. Note that a man’s character tends to be consistent in matters great and small. His campaign against Dr. Hedin was a big deal, with significant and wide-ranging effects not just on a professor but also the students who found the course valuable, and on an entire university’s academic freedom. What I’m about to describe is very small stuff by comparison, yet it is telling.

There was a time when I left a comment on his blog with my iPhone, which unhelpfully “corrected” his name to “Cony.” His response was, “It’s “Coyne”, Gilson. You can’t even get my damn name right. You hurtin’ for trafffic?” I wrote back (details here) explaining how the misspelling happened, and he blocked my answer from appearing, leaving his own inaccurate opinion as the last word.

One who pronounces judgment without admitting all evidence is not qualified to judge at all.

In another discussion a Coyne-friendly commenter challenged me, “please present the best argument for creationism.” Dr. Coyne blocked my answer from appearing, but did allow a later commenter to demand that I “Put your God where your mouth is.” That commenter could not have known that I had indeed done so, and that Dr. Coyne had muzzled my answer. (Details may be found here.)

One who does not allow the other side’s viewpoint into evidence is unqualified to be a judge.

And though it’s almost too obvious to mention, I think it’s worth pointing out Coyne’s deepest disqualifier: he has his own chosen side in this matter. He’s biased. No, not just biased: he has staked out a position of absolute non-accommodation (meaning: there can be no possible accommodation, rapprochement, or even discussion between religion and science), and he’s completely committed to utterly vanquishing all opposing viewpoints.

For the sake of good writing style I may have overused the superlative modifiers there (absolute, completely, utterly), but for the sake of describing the situation I have used them appropriately. This is who Dr. Jerry Coyne is.

And finally, I have to wonder what it is about Dr. Hedin’s and Dr. Bowden’s openness to asking questions in university seminars that perturbs Dr. Coyne so much. There is anger there, undoubtedly. I suspect there is fear as well. What you won’t find there is any sense of inviting true inquiry. In fact with respect to these kinds of issues, the only inquiry he seems open to is the kind that seeks to smell out anyone asking questions about naturalistic evolution—so that he can inquire, convict, and condemn.