“The Magician’s Twin: C.S. Lewis on Science, Scientism, and Society” 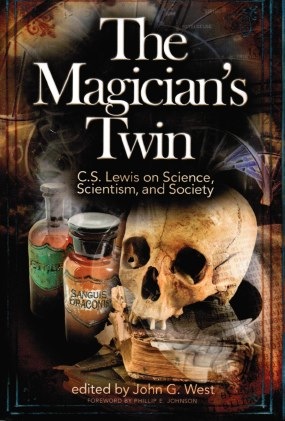 This had to have been a labor of love. That’s the way I’ve always felt about C.S. Lewis: from fiction to philosophy, he’s a delight to read. And even though “serious” philosophers have pooh-poohed him as not being one of their number, well, he never claimed to be; and yet somehow he remains influential. Part of it’s because he has a way of making good sense. Part of it is because he’s so enjoyable to read. John G. West and the others who produced this volume obviously caught both those sides of Lewis.

And yet there is more to Lewis than that. James A. Herrick spoke it well in Chapter Ten of The Magician’s Twin: “we read Lewis as a friendly uncle; we need to encounter him as a fiery prophet.”

Lewis, like G.K. Chesterton before him, saw clearly where scientism could take society. It’s a dark vision, one which he presents most thoroughly in the lecture collection The Abolition of Man, and in the third book of his science fiction trilogy, That Hideous Strength. These two books tell a common story, one in essay form, the other in imaginative fiction.

There is strength in science. Like any other great strength, if left unguarded it tends to invade property beyond its borders. It is the peculiar error of scientism to suggest that science is its own watchdog. But Dobermans don’t bark at themselves, and science won’t bark at science. If the only principle ruling science is science, then science will expand and annex whatever it sees: including ethics.

That’s not to say that scientists won’t ever restrain science, for men and women can and often do allow themselves to be ruled by legitimate ethical principles. What Lewis saw so clearly was what can happen when we suppose there is something in science itself, rather than in the way (Tao, he called it) of ethics, that we should let run the show. There is a reason he named his novel That Hideous Strength.

But there is more to Lewis and science than this. He wrote of the insanity of scientific reductionism. He contested science’s imperious claim to rule all of knowledge, pointing out (as has often been said) that how science rests on a philosophical foundation that could only have arisen under theism. As a professor of medieval literature he had reason to know.

Everyone wants to claim Lewis for themselves, it seems, at least in the Christian world. In April of 2011, Michael Peterson of Asbury University wrote” a comprehensive study of the views of Christian author and apologist C. S. Lewis on the theory of evolution and the argument from intelligent design,” finding that Lewis was a thoroughgoing theistic evolutionist. John West and others take issue with the comprehensiveness of Peterson’s study. Digging from Lewis’s letters as well as his published works, they find that he probably believed in a literal Adam and Eve, and he definitely insisted on an historic fall, both of which Peterson had denied of Lewis. Lewis had doubts (understandably, for he was an able thinker) concerning the creative power of natural selection:

Lewis did affirm that “[with Darwinianism as a theorem in Biology I do not think a Christian need have any quarrel.” But for Lewis “Darwinianism as a theorem in Biology” was a pretty modest affair. Contra leading evolutionists, Lewis thought the “purely biological theorem… makes no cosmic statements, no metaphysical statements, no eschatological statements.” Nor can Darwinism as a scientific theory explain many of the most important aspects of biology itself: “It does not in itself explain the origin of organic life, nor of the aviation’s, nor does it discuss the origin and validity of reason.”

On that topic, the origin and validity of reason, Lewis’s arguments were particularly provocative. One section of The Magician’s Twin‘s is devoted to explaining the argument from reason as Lewis presented it and as it has progressed since then.

Lewis died almost 50 years ago (the same day as President Kennedy) yet remains relevant and influential—and really fun reading besides. This volume does him justice. If you love C.S. Lewis as I do, you’ll know that’s high praise indeed. I recommend the book highly.

6 thoughts on ““The Magician’s Twin: C.S. Lewis on Science, Scientism, and Society””