This post started out to be one thing and ended up being another. I wrote the part between the two asterisk groups before bedtime last night, and then I got stuck. You’ll see why when you get to the end of that section. I slept on it, and this morning I decided to let you in on some of the process I went through to come to a conclusion. I think it’s an important one, even though it’s not what I thought I was going to say when I started out on this post.

I expected more of a pushback on my post last night, “The Bastion of Reason.” Skeptics and atheists rarely see the church in that role. More often they’ll say things like,

This blog is a promotion to science, intelligence, free thinking, and awesomeness. We aggregate the web’s best atheist content. 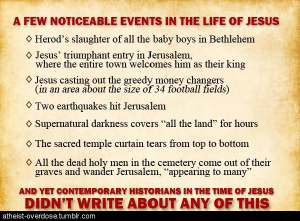 I didn’t just pick that out of the air, naturally. A Facebook group I’m in has been discussing a graphic on that tumblr site that implies there’s something fishy about all those incredible events in the life of Jesus that no one ever wrote about. No one but his biographers, that is. (I’ve included a reduced-size version of that graphic here.)

The first of these was Herod’s terrible slaughter of the baby boys in and around Bethlehem (Matt. 2:16-18). Why didn’t that make CNN at the time, or its equivalent? Well, first of all, if there had been some proto-CNN at the time … oh, never mind, there wasn’t any such thing. No one took it upon themselves to tell the world all the news of the world.

But even if there had been, there’s not much reason to think proto-CNN would have reported on this. Bethlehem was a small town, and there couldn’t have more than about a dozen baby boys there. Herod was a butcher. As he was getting older he ordered the chief men of Judea to be imprisoned, ready to be killed at the hour of his own death–so that someone would mourn when he died.

I’ll move on to the graphic’s third point. Iin my new hometown of Lebanon, Ohio, we have the largest YMCA in the country (in square footage, that is). There’s a soccer football field (pitch) inside our Y. Naturally it’s a bit smaller than a regulation soccer field. Maybe that’s the one this author had in mind when he said the events took place on an area the size of 34 football fields. Although the entire temple property was sizable (about 27 American football fields), as my friend Tim McGrew pointed out in that Facebook discussion, the sacred precincts within were much smaller.

As he went on to say there (reposted with his permission),

It is completely unclear why the size of the Temple area should make this event likely to be recorded by anyone but the four Evangelists.

For comparison, the catastrophic burial of the towns of Herculaneum and Pompeii in the eruption of Mt. Vesuvius in AD 79 goes unremarked by both Pliny the Younger, an eyewitness who wrote an extensive account of the eruption, and Suetonius, who also mentions the eruption. The first written record of their destruction that survives today is by Dio Cassius, who not only did not witness it but in all probability had never spoken to anyone who had. So what?

And one more. For this one I’ll quote at length from Dr. McGrew:

5. “Supernatural darkness covers ‘all the land’ for hours.”

Presumably the graphic means to refer to the earthquake at the time of Jesus’ death mentioned in Matthew 27:51 and the account in Matthew 28:2 of the events at the time of the resurrection. There is no particular reason to think that we would have information about this earthquake in any other author of the time; there simply isn’t any systematic record of natural phenomena of this sort. That said, I note for the record that in Jerome’s translation of Eusebius’s Chronicon, Olympiad 202, we do find some notices of a widespread earthquake around the years AD 32-33, affecting regions as far away as Turkey.

The darkness was notable; none of the Gospels claims that it was supernatural. Phlegon’s remark about the darkness is also quoted in the same passage of Eusebius’s Chronicon.

Sometimes, of course, it is claimed that we should expect a detailed account of these things from contemporary writers. Thus Gibbon, in the second volume of his Decline and Fall of the Roman Empire, writes that the preternatural darkness “passed without notice in an age of science and history. It happened during the lifetime of Seneca and the elder Pliny, who must have experienced the immediate effects, or received the earliest intelligence of the prodigy. Each of these philosophers, in a laborious work, has recorded all the great phenomena of nature, earthquakes, meteors, comets, and eclipses, which his indefatigable industry could collect. Both the one and the other have omitted to mention the greatest phenomenon to which mortal eye has been witness since the creation of the globe. A distinct chapter of Pliny is devoted to eclipses of an extraordinary nature and unusual duration: but he contents himself with describing the singular defect of light which followed the murder of Caesar, when, during the greatest part of the year, the orb of the sun appeared pale and without splendour.”

Why Pliny in Italy, or Seneca in Rome or in his banishment in Corsica, should have taken notice of an unusually dark Friday afternoon in Judea is not clear. But in order that you may judge the honesty and candor of Gibbon, I will here transcribe and translate, in its entirety, the chapter of Pliny to which Gibbon alludes, from his Natural History 2.30:

“Unusually long, portentious eclipses of the sun also take place, as when Caesar the dictator was slain; and in the war against Antony, the sun remained dim for nearly a year.”

Yes, that’s right: the chapter of Pliny that is “devoted to eclipses of an extraordinary nature and unusual duration” consists of a mere eighteen words of Latin.

There is within some atheist circles a conceit of intelligence that thinks it can survive while disconnected from knowledge. This is not “awesomeness,” it’s sadness. It’s not helpful to the promotion of reason or free thinking, whether of atheists or of Christians.

The same thing could be said of some Christians, I know. I’ve blogged on some of them, too.

That’s where I got stuck last night. I’m sure you can see the problem. I’m complaining about an atheist making mindlessly uninformed errors, yet to be honest I have to admit that sort of thing happens among Christians, too. Is there any difference in principle between the two? Does one group do it more than the other? I have no data, so I wouldn’t presume to say. So what’s the real difference?

Obviously (or so I thought) this kind of mindlessness among atheists leads to dangerously wrong anti-theistic conclusions, whereas (since at least their conclusions are not opposed to the Christ and his Kingdom) the same kind of uninformed prattle among Christians is more benign.

With further thought I had to reject even that idea.

When atheists put out this kind of nonsense it undermines Christianity in their readers’ minds. That is their intent, and I’m sure it accomplishes its purpose. When Christians speak uninformed nonsense it undermines Christianity more gradually, more subterraneously (below the surface), but just as seriously. It promotes the impression that the faith itself is uninformed and mindless. Uninformed Christian drivel makes its listeners dangerously vulnerable to uninformed atheistic drivel.

Which leaves me with conclusions of two kinds, one concerning what I started to write about, and another concerning the new direction my thoughts took overnight.

I conclude with this final word of advice for my fellow believers:

Let’s keep learning so we can grow in the knowledge of God, be confident of what we do know, and be equipped to answer questions like the ones this blogger raised. Meanwhile let’s recognize always that there’s always going to be a lot more we don’t know than we know. Let’s be leaders in real knowledge; and let’s not act as if we know what we do not know.

P.S. Thank you to Dr. Timothy McGrew, who knows a lot more than I do about the relevant history. It’s fine to quote knowledgeable authorities, especially when they make their case as clearly as he did.