Do We Need To Prove All Other Religions False? 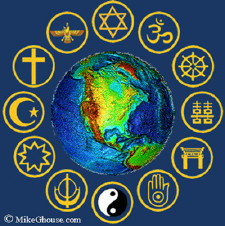 Comment conversations here lately have brought up the question, “Sure, you think Christianity is true. Muslims think Islam is true. Hindus think Hinduism is true. What makes you think you’re any more right than they are? Not only that, but if you applied the same standard to Christianity that you do to those other religions, you would reject Christianity just like you do all of them.”

That’s not so, actually. I’ve looked at the world’s major religions. Here briefly are the reasons I accept one while rejecting the others.

1. Christianity and Judaism are unique in being historically situated.

Unlike all other religions save one, the truth of Judeo-Christianity stands or falls depending on historically testable facts. Islam, Hinduism, Buddhism, secularism and tribal religions—the other major worldview groupings—are philosophical systems. Judeo-Christianity is a story. The other worldviews have no story by which to test their truth. Buddhism and Islam do have stories of their founders, but they are incidental to the message; their messages could have been delivered in many other ways, and in a sense their messages could be true even if their founder stories were false, for their founders were only messengers.

So we can’t apply the same truth tests. Note that this means that Judeo-Christianity is much more easily falsifiable. The others cannot be disproved by historical research, Christianity and Judaism could be.

The one exception among other religions is Mormonism, which also makes historically testable claims. We can and do apply the same kind of standard to Mormonism that we apply to Christianity. It fails.

Still on the basis of just this one item, other religions might be true. Let’s go on. I’m being necessarily brief here but I’ll do what I can in the space of a blog post.

Buddhism and Hinduism are generally pantheistic: they hold that all is god, and god is all; and the fundamental problem of humans is that we do not recognize our identity with the all. Their goal is extinction of the person in Nirvana, the swallowing of the individual in the all. But this is a type of monism, a view of all reality being essentially one thing, which fails to satisfy rational inquiry. It erases distinctions that the rational person knows are real: self and the universe, good and bad, the physical and the non-physical.

Islam’s messenger was a war-monger and a rapist. The Qur’an approves of violence toward nonbelievers. Islam’s advance throughout the world has been mostly through military conquest.

The Trinitarian God of Christianity is a God whose perfection requires no creation to complete it: He is one, yet he is love and other relational attributes are completed in relationship among the Persons of the Trinity.

Atheistic secularism leads to the conclusion that consciousness and free will are illusions, that humans are ontologically indistinct from the rest of nature, that there is no real objective morality, that purpose is individual and contingent, and that the world is either eternal or created itself (from nothing, some even say!). The first two in particular are not only hard to believe existentially but impossible to accept philosophically, for they are rationally self-defeating: if they were true they could never be discovered to be true.

Christianity passes all the tests of truth to which I have been able to put it: historical, philosophical, existential, experiential. It satisfies both the heart and the mind. Only one religion, one worldview, can be true.

Update 6:15 am May 26: see comment 4. This is one of those posts I wish I had taken more time with, because there’s a lot more I could have said. I have done considerable reading into Eastern religions, for example, but it’s been a while ago, and I’d need to review it to be able to pass along to you more of the main reasons I found them wanting. I won’t try to fix the post now; I’ll just leave it with this note to say that I don’t consider this one of my best, and I won’t try to defend it as if it were.

264 thoughts on “Do We Need To Prove All Other Religions False?”