It Must Be Christmas: I Agree With Jerry Coyne! 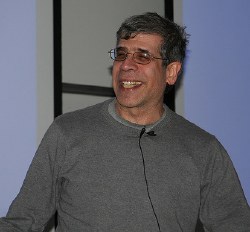 I’ve been quite critical of University of Chicago biologist Jerry Coyne on more than one occasion, so I was quite surprised to find myself nodding in agreement with him today on a religion-related topic. He opened up this blog post saying,

There’s a pretty dreadful piece by Tim Padgett in the latest online Time Magazine (I’m not sure about the print version) called “Having faith: what both Hitchens and fundamentalists don’t get about religion.“ It’s an attack on both fundamentalist Christianity and Christopher Hitchens, who stands for all New Atheists, and they’re guilty of the same faults. Guess what they are? Narrow-mindedness and intolerance, of course—the usual trope about “fundamentalist atheists”. But along the way, Padgett (and I can’t find much information online about who he is) manages to proffer a lot of distorted, shopworn clichés and misstatements about both religion and atheism.

(Padgett is apparently Time’s Miami and Latin America bureau chief. I’m in no position to comment on his criticism of David Caton, other than what you see here, though it does strike one as terribly overblown.)

Coyne points out, quite accurately, that Padgett is hopelessly naive on Islam. He criticizes Padgett’s characterization of New Atheists as “angry atheists,” which is a matter of opinion, I suppose. I didn’t say I agree with everything Coyne said. But I do stand with him in finding this from Padgett hard to believe:

Here’s what they [the “angry atheists”] refuse to get: Yes, Christians believe that Jesus’ nativity was a virgin birth and that he rose from the dead on Easter. But if you were to show most Christians incontrovertible scientific proof that those miracles didn’t occur, they would shrug — because their faith means more to them than that. Because in the end, what they have faith in is the redemptive power of the story. In Evelyn Waugh’s novel Brideshead Revisited, an agnostic says to his Catholic friend, “You can’t seriously believe it all … I mean about Christmas and the star and the three kings and the ox and the ass.”

“But you can’t believe things simply because they’re a lovely idea.”

I’m willing to bet it’s how most believers believe.  Before Hitchens died at 62 from esophageal cancer, he made a point of declaring he was certain no heaven awaited him. But that swipe at the faithful always misses the point. Most of us don’t believe in God because we think it’s a ticket to heaven. Rather, our belief in God — our belief in the living ideal of ourselves, which is something even atheists ponder — instills in us a faith that in the end, light always defeats darkness (which is how people get through the wars and natural disasters I cover).

Coyne goes on, “With all due respect to Padgett (I don’t really mean that, of course), that is hogwash.”

Thank you, Dr. Coyne. That kind of sweet, lovely, la-de-da “belief,” if it exists anywhere, and I’m afraid it does in some places, is putrid silliness. Coyne quotes statistics showing Padgett is factually wrong to think that’s “how most believers believe.”

He and I were of course bound to part ways somewhere, sad to say. He finds the sociological facts of belief quite distressing in one way; I find them distressing in another. He thinks it’s awful that people believe in the Virgin Birth, the Resurrection, and so on, whereas to me the problem is that, if such a large majority really believe those things, why aren’t we making more of a positive difference in the world?

Coyne asks, “I always wonder how many Christians would remain Christians if they knew, absolutely, that the New Testament was a fabrication and that there was no afterlife?”

My answer: I would chuck my beliefs in a minute if I could no longer believe them. I mean, what’s this craziness about believing things “because they’re a lovely idea”? I thought believing meant you held something actually to be true. And if I no longer thought Christianity was true, I would no longer believe it. I would no longer have any reason to pretend I believed it, either. (I don’t get paid much for this, you know.) Christmas is about the real incarnation (the coming in the flesh) of the real God, by way of a true virgin birth. If I didn’t think that was true, I might still celebrate Silver Bells and Santa Claus, but I wouldn’t pretend it was a religious holiday. Thankfully, I know it’s for real; because I’m not sure I’d get that much of a kick out of Silver Bells and Santa Claus alone.

Coyne disagrees with Padgett’s idea that “we need religion to have a good world.” This is a bit more complicated, since there is strong evidence for Christianity’s positive effect on the world over time. Vishal Mangalwadi has written the best recent work on that. Padgett’s reasons for saying religion can be good for the world, though, are as much pap as anything else in the article. Coyne and I both find this nauseating:

Rather, our belief in God — our belief in the living ideal of ourselves, which is something even atheists ponder — instills in us a faith that in the end, light always defeats darkness (which is how people get through the wars and natural disasters I cover). That does make us open to the possibility of the hereafter — but more important, it gives us purposeful inspiration to make the here and now better.

Our belief in God is not (for Christians) “belief in the living ideal of ourselves.” Sheesh.

Coyne ends his piece with a graph produced from data delivered by Gregory S. Paul, who has a history of cooking statistics to serve his purpose. I have my doubts about this set of information, too, but I haven’t looked at it the report so I won’t assume anything further about it.

3 thoughts on “It Must Be Christmas: I Agree With Jerry Coyne!”