Is It Rational To Believe In Spiritual Battle? (Part 1)

It’s been just over a year since I began working with BreakPoint/The Colson Center for Christian Worldview. (I’m still on the staff of Campus Crusade for Christ, soon to be named Cru, and this is my current assignment.) The year has been remarkably intense. We’ve made significant progress toward high-impact ministry goals, yet meanwhile our family has had a very difficult year of illness, injury, financial challenges, and above all my mother-in-law’s extended illness and her passing away last spring.

We think it’s possible this represents spiritual battle, and yes, by that I mean demonic opposition. But to say that is to take the ultimate risk of looking foolish, for if there’s anything the progress of science has taught us, it’s that we can explain all these kinds of things naturally, right? Our family has had a run of hard luck, but statistically these things happen, so there’s no need to look beyond the usual, known causes. Human psychology is prone to attributing all kinds of chance events to some kind of purpose, or design, or intention, and it’s time we grew up and got out of that habit.

So goes the story. It’s not just atheists, agnostics, and other secular types who think that way. A lot of Christians do, too. We, too, have learned that science can explain what spiritual superstition once credited to dark and demonic forces. But I want to suggest that this is not the rational view that it purports to be.

It will take more than one post to cover this. I’ll start with something simple to get things rolling: Has modern medicine really replaced spiritual superstition with physical knowledge?

To some extent, the answer is definitely yes. We know that epilepsy can be explained by neural circuits gone awry, and that voices in the head are correlated with abnormalities in the physical brain. These conditions call for medicine, not for exorcism; and they are but two out of many examples we could cite. We know, too, that although “witchcraft” and “the evil eye” may actually cause injury, it’s strictly a psychological effect; there’s no actual spirit assaulting the victim.

These things we know, and they represent real progress in knowledge. I don’t discount that, but I do want to suggest that it’s not the whole story. For one thing, it’s not really fair to judge the pre-scientific Western world as being spiritually superstitious. It was just pre-scientific and pre-naturalistic. Consider the practice of blood-letting, or the belief that malaria (from the Latin for “bad air”) was actually caused by bad air. (Once in Asia I was told by a local resident to close the windows at night, not because of burglars—this was on a moving train—or even mosquitoes, but because of “bad air.”) 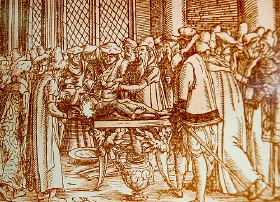 Our ancestors had no overarching physical theories for disease as we do today, for example the germ theory, genetic theory, or psychosomatic theory. At the same time they had no reason not to include the spiritual world in their set of possible causes for illness. From our perspective today it’s hard to know how they came to some of the strange conclusions they reached. We don’t even know if some treatments—like trephining—were thought to be mostly physical or mostly spiritual. We do know, however, that they did not indiscriminately attribute every problem to the spiritual world. Modern science has replaced some spiritual superstition, to be sure, but it has also replaced some physical superstition.

That’s only half of the answer to the question I asked, though: Has modern medicine really replaced spiritual superstition with physical knowledge? At this point some of you who jumped to your mice and keyboards can relax: I know I was making at least one serious error in what I wrote above. That error was in placing psychosomatic effects on a list of known natural causes for disease. Modern medicine has not yet figured out how the mind affects disease processes, whether for good or for ill. The placebo effect is a mystery: there is no known physical pathway from cause to effect. This is not to deny that some portions of the pathway have been at least partially scoped out, but the first steps remain unknown. This is not the same kind of puzzle as, say, cancer, for which researchers at least have a set of physical theories to work with. How the mind affects the body is a different kind of question entirely.

Therefore whether one believes in a non-physical spiritual reality or not, one ought to acknowledge that it’s not true that modern medicine has replaced spiritual superstition with physical knowledge—not even with physical theories, in at least one case.

That’s just a small first step toward answering the overall question I’m raising in this series. I’ll be back with more.

4 thoughts on “Is It Rational To Believe In Spiritual Battle? (Part 1)”