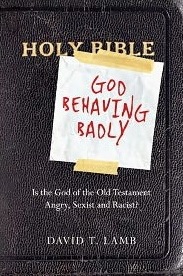 God Behaving Badly: Is the God of the Old Testament Angry, Sexist and Racist? by David T. Lamb

“How does one reconcile the loving God of the Old Testament with the harsh God of the New Testament?”

You read it right. That’s exactly how David Lamb opens God Behaving Badly. A few pages later he admits the question implies a distorted view of the Bible—but no more than the usual, “Now does one reconcile the loving God of the New Testament with the harsh God of the Old?”

To begin a book that way requires a love for the Old Testament coupled with a healthy sense of humor. The author follows up the question by describing what happens when he asks it in classrooms; and I think he must really enjoy teaching, too. The three traits together make David Lamb a very readable writer and an excellent teacher in print.

God Behaving Badly covers much the same set of Old Testament problems as Paul Copan’s Is God a Moral Monster?, which I reviewed a few months ago, but on a considerably more popular level. Copan delved deeply into comparative Ancient Near East literature. Though Lamb is clearly aware of that research—it’s in the background everywhere, and sometimes come to the fore—he relies less on that and more on the biblical text itself, and also on common experience and common sense.

Consider the famous prohibition against wearing mixed wool and linen fabrics (Deut. 22:9-11). I remember how badly that bothered me the first time I read it (decades ago, now). How could that possibly make sense? Lamb reminds (p. 124) us that not everything that was written that long ago has to make sense:

While commands about clothing may seem bizarre and unnecessary, these types of laws are culturally specific, addressing particular problems front heir context. Imagine how advice given in a 2010 sermon about lust would sound to a reader in the year 5010: “Don’t buy Sports Illustrated in early February, and avoid the red-light district. Most males today understand that the SI swimsuit issue comes out right after the Super Bowl and that in a certain section of town they can expect to find prostitutes, but in three thousand years (roughly how distant we are from these Old Testament laws) this sound advice for avoiding sexual sin won’t make sense. It would seem random, like a command not to wear wool and linens.

That illustrates Lamb’s approach, as well as being a reminder that some seemingly hard questions have unexpectedly common-sense answers if you think about them a bit, and are willing to be somewhat charitable about them.

But that’s an easy one. Most of the book is about God’s appearance of being “angry, sexist, and racist.” Lamb helps us think more sensibly about these matters, too. God’s supposed sexism appears early, in Genesis 1-3, where the woman is fashioned out of the man’s rib and, after falling to temptation, is cursed to be ruled over by the man. Woman is second in creation. Lamb asks, does that make her inferior? Why would that conclusion follow? Second is often better. I’ll take Lamb’s illustration on that and personalize it. Sometimes I post blog entries here on a first draft. Those are my worst ones. My re-writes are considerably better! I’m not saying (neither does Lamb) that God needed to practice on Adam in order to get it right with Eve. The point is rather that being second in sequence need not imply being second in quality, value, or worth. It just doesn’t follow.

What about the woman being ruled over by the man? Lamb’s answer is that God did not intend it to be that way. It was a disastrous result of sin, just as the rest of the curse was for both man and woman (Genesis 3:14-19). This point deserves caution. Sin was not the cause of hierarchy, for in the Godhead there is headship and submission: the Son submits freely to the Father. What sin produced was harshness of headship on the one hand: the tendency to domineer or even to enslave, the impetus to use and to abuse; and jealousy, envy, and resentment on the other. Our democratic Western world can hardly conceive of hierarchy without such flaws, but that difficulty is no greater than conceiving of a sinless, perfect world in general. We’re mixed-up enough that it’s hard to know what the right way around looks like.

Lamb has more than this to say about “sexism” in Genesis. He wraps up the section (p. 59f),

All of those conclusions came right out of the text. All it took to reach them was a charitable approach and some good common-sense, clear-thinking interpretation.

I’ve drawn out three short snippets from God Behaving Badly now, all for the purpose of providing a sample of the author’s approach. For such an ancient and contentious topic, it’s an amazingly readable book. It’s an important one, too, in these days when false conceptions of God permeate the atmosphere like the sound of cicadas I hear from the back porch this morning. I don’t think we can teach the Old Testament adequately these days without addressing those misconceptions. Part of teaching is un-teaching: bringing false assumptions to light for examination and correction. The “harsh God of the Old Testament” has been a common misconception for many years. Now the “sexist/racist God” is, too. These errors need to be addressed, so students can see how God’s holy, just, and loving character shines throughout his Word.

For that reason I would strongly recommend this book as a main course for church-based teaching on the Old Testament for all ages from high school on up. Discussion questions are provided for each chapter. It could also be a helpful resource to go along with other Old Testament studies. I could see it being of value in Christian high schools. Don’t let that kind of recommendation stop you from reading it on your own, though. It’s a great way to grow deeper in your knowledge of the holy, loving God of the Old Testament.