There’s a strange whiff in the media air, a sort of polyamory chic in which liberally minded journalists, an aggregate mass of antireligious pundits and even scientists themselves have begun encouraging readers and viewers to use evolutionary theory to revisit and revise their sexual attitudes and, more importantly, their behaviors in ways that fit their animal libidos more happily.

… the basic logic is that, because human beings are not naturally monogamous but rather have been explicitly designed by natural selection to seek out ‘extra-pair copulatory partners’—having sex with someone other than your partner or spouse for the replicating sake of one’s mindless genes—then suppressing these deep mammalian instincts is futile and, worse, is an inevitable death knell for an otherwise honest and healthy relationship.

If you believe, as I do, that we live in a natural rather than a supernatural world, then there is no inherent, divinely inspired reason to be sexually exclusive to one’s partner. If you and your partner want to … [multiple suggested acts, omitted for reasons of decency] … then by all means do so (and take pictures). … Right is irrelevant. There is only what works and what doesn’t work, within context, in biologically adaptive terms….

This is bound to provoke revulsion in any decent reader, and rightly so. Anger, too—rightly so. Even fear—rightly so. But not the kind of fear that some have mistakenly ascribed to some of us, like Stuart Kauffman, who wrote earlier this year,

I suspect the fear of evolution is also based in the view of many that God is the author of our moral laws. Then if the Bible is God’s literal word, and yet evolution is true, the Bible, the very word of God, is false, and our morality falls to the ground….

But evolution, in fact, is no enemy of morality.

Or Michael Shermer, who wrote in the blurb for his book, Why Darwin Matters,

No, this is not “I’m-afraid-of-evolution-therefore-I-can’t-accept-it’s-true.” In fact I reject naturalistic evolution because I believe it is incoherent, impossible, and contradictory to other things I know to be true. The fear of evolution of which I speak is based on a reasoned knowledge of its actual dangers. 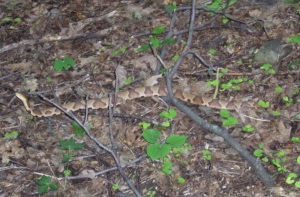 Some readers will jump in and say it’s weak for me to be motivated by fear. I have a story about that. Last summer my wife and I encountered rattlesnakes on three consecutive hikes. It’s never happened to me before. The first one was just off the path, it was a little one, and we stopped and took the picture you see here. The second one was stretched out fully across the path in our way. I chucked some stones toward it and waited till it slithered out of the way; then we walked on by. The third one we heard but did not see. Some other hikers were ahead of us in the trail, and they were on the same side of the shrub it was on. We heard it rattling. I asked, “is it coiled?” They said it was. Now, that was intriguing to me. I’ve never seen a coiled-up rattler in the wild. But we got out of there anyway.

Fear of the second snake caused us to move slowly. Fear of the third one, coiled and ready to strike, drove us away completely. To act based on fear of genuine danger is both good and wise. Ideas have consequences, and in the case of evolution, one of those consequences is that (as Bering said), “Right is irrelevant.” That’s a perfectly sound conclusion from naturalistic evolutionary premises. Do you think that idea has no consequences? Would you marry someone who believes right is irrelevant? Would you let your daughter date someone like that? If so, your lack of fear is a morally and intellectually reprehensible lack of wisdom.

Bering thinks he can get past all that. In spite of the “polyamory chic” of which he speaks at first, he goes on to say evolution gives us something to hold relationships together in something like sexual faithfulness:

And that is simply the fact that we’ve evolved to empathize with other people’s suffering, including the suffering of the people we’d betray by putting our affable genitals to their evolved promiscuous use.

Heartbreak is every bit as much a psychological adaptation as is the compulsion to have sex with those other than our partners, and it throws a monster of a monkey wrench into the evolutionists’ otherwise practical polyamory.

“Practical polyamory”?! Do I fear sexuality being taught that way? Of course I do. What kind of idiot wouldn’t? It’s a coiled snake—even if there’s empathy in the evolutionary mix, as you’ll see as we continue. Bering goes on to describe heartbreak in both social and chemical detail, include his own despair after being rejected by his gay lover.

All this is to say that I reacted the way I did because, at an unconscious level, I didn’t want my testiculared partner getting impregnated by another man. I don’t consciously think of him as a woman, mind you; in fact, if I did, I assure you I wouldn’t be with him. But tell that to my gonads and amygdalae.

HIs heart was broken. There’s only one reason we don’t do that to each other every chance we get: empathy. That’s what Bering says holds human morality together.

By no means would I diminish the value of empathy. It certainly does guide and restrain human behavior. When I wash the dishes or fold laundry at home, it’s not because I love those jobs, but because I love my wife, and out of empathy I prefer that she not have to do them. Obviously empathy informs much larger decisions as well. Of course empathy is better explained on theism than naturalism.

For Bering and other naturalistic evolutionists, empathy is a chimera, genetic self-interest masquerading as selflessness. Empathy dances a dialectical pas de deux with promiscuous sexuality, a duet with (pardon the anthropomorphism) just one purpose: to produce multiple generations of babies. They’re equal partners in their evolutionary art, says Bering, and together they perform very well.

There is no right or wrong in that. It is what it is. It propagates genes. There’s no logically defensible way to identify one partner in this dance as morally better than the other. They’re both behaviors adapted for species survival, and neither could do it without the other. If you label empathy more respectable or praiseworthy than rape or wanton promiscuity, your labeling it so is just another behavior evolution has cooked up to join the dance. (It’s more of a pas de trois.) Oh, and one more thing: it’s not your dance. “Tell that to my gonads and amygdalae,” Bering says. He knows that evolution means he’s a puppet on their string. If you think it’s your dance—that you’re anything but a puppet toy in the propagation game—that’s another labeling behavior that evolution has found effective to get us all to reproduce.

I despise that teaching—even though it makes perfectly good sense on naturalistic assumptions. Because even though Bering thinks nothing can speak to his gonads and amygdalae, I know that people actually can think about their behaviors, and based on thinking they can actually make choices. I can see that if young people are taught a pervasive philosophical system that denies the roots of right and wrong, and that glorifies procreation, they’ll decide to do exactly what they’re doing. Hooking up at every chance they get. Cohabiting. Practicing serial marriage, divorcing right and left. Glorifying immorality of all sorts, both hetero- and homosexual.

And killing themselves emotionally, physically, and spiritually in the process.