As We Forgive: Stories of Reconciliation From Rwanda

“One of the most haunting things about living in Rwanda after the genocide is that killers still walk among the survivors.” (From page 249.)

I have just experienced one of the most remarkable books of my life: As We Forgive: Stories of Reconciliation From Rwanda, by Prison Fellowship senior writer and editor Catherine Claire Larson. 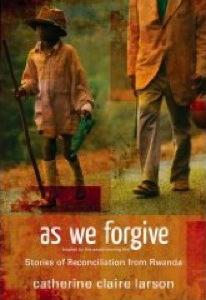 Next Thursday evening at 9:00 pm EDT, here on this blog, you will have the opportunity to meet Catherine and interact with her in an online chat. I urge you to mark it on your calendar. If you can get your hands on the book before then, I urge you to do that too.

This posting will not be a complete book review. I intend to extend that out over several posts between now and Thursday. What I have to offer right now is an initial reaction.

In about 100 days in 1994, between 500,000 and 1 million Rwandan Tutsis were massacred by their neighbors, the Hutus. Murder on this scale is beyond imagining. Larson tells seven very personal stories of victims’ and survivors’ experiences—stories not for those with weak stomachs. Her reporting succeeds in walking the fine line between expressing the heart of the pain, and sensationalizing it. I’ll come back to some of that later.

The real core of her book is not about the massacre, but about what has come since. Rwandan prisons could never hold all the murderers. Large numbers of them were released. Killers walk among the survivors. And in the stories she brings us in this book, reconciliation has been possible.

Personal Reflections
I come from a very small town, from very middle-class roots. My mother’s parents were both immigrants from Norway, homesteaders in North Dakota, hard-working, God-fearing people. They moved their large family to Michigan late in the 1920s, to a small town south of Flint, which at the time was very much a thriving community. All of their children—my mother and aunts and uncles—lived out their values of hard work, love, and respect. You wouldn’t think that two of their grandchildren would meet their ends through murder.

My cousin Jeanette was jogging in a park in Lansing. It took fifteen years to identify her murderer, which finally happened through some outstanding detective work aided by a virtual miracle of evidence found after all those years. Her case was featured on the A&E channel’s Cold Case Files show. I didn’t see it when it first aired. I happened on it while alone in a hotel room on a business trip, surfing through channels with the remote control. Let me give you this advice I hope you never need: if you are ever going to see the story of a relative’s murder on TV, don’t do it while alone far from home. I could hardly bear to watch it. It wasn’t that the story was new to me; I had been keeping up with it all along through the family. But it was brutal to see it played out before me on the television screen. I could hardly stand watching it, but there was no way I could turn it off, either. This was family. At the end they interviewed my Aunt Muriel and my cousin Joe, Jeannette’s brother. I sat there watching, crying, alone.

My cousin Brian was walking his dog in an upscale gated community just west of Orlando. A car drove by, going too fast, and he called out to them to slow down. Somebody got out of the car with a gun and shot him for it. I saw him in the hospital a few weeks later, again while traveling alone on a business trip. The first time I saw him—well, to describe his condition would be to go beyond the bounds of what I ought to write. He hardly looked human. The second time I saw him, a few months later, there appeared to be hope. He was able to sit up in bed, and was in good spirits. But he succumbed to a final infection. His killer was never identified.

Massively Multiplied Pain
Experiences like these carry a pain that will never go away. They can also carry an anger that lasts. Compared to Rwanda, though, they are as nothing. Neighbors killed neighbors by the scores. Survivors lost mother, father, siblings, children, aunts, uncles, grandparents, and friends. I do not know the multiplier that would take my experiences and feelings, and match them to those of the survivors in Rwanda.

It took me a long time to read this book. (I hope that you will be able to read it more quickly than I did.) On virtually every page–especially in the first several chapters—I had to stop and think and pray, to recover: to recover from facing the reality of how brutal we can be to each other. Even more than that I had to pause often to recover (in a way) from the astonishing wonder of how God could work to bring forgiveness and reconciliation nevertheless.

I can forgive my cousins’ killers as far as it is my place to do so (for the loss or pain I have experienced through what they did), but to do so is to pass a far lesser test than Rwandans have faced. One of the killers is in jail for life, and since I wasn’t at trial I’ve never seen or met him. The other is unknown, and will probably never be identified. Forgiveness is no mere academic point in that case, but it is nothing like forgiving a genocidaire who targeted most of one’s own family—and then living as neighbors with him in the same village.

Could the Gospel really be that good, that really powerful, to effect such deep change in the most difficult of real situations? Then it is even better than I had realized. Not any easier, but better.

There will be more to come. Please be ready to join us for our chat on Thursday night.

As We Forgive: Stories of Reconciliation From Rwanda, by Catherine Claire Larson. Grand Rapids: Zondervan, 2009. Paperback, 284 pages. Amazon Price US$12.47.

2 thoughts on “As We Forgive: Stories of Reconciliation From Rwanda”