The Next Christendom: The Coming of Global Christianity (Revised and Expanded Edition) 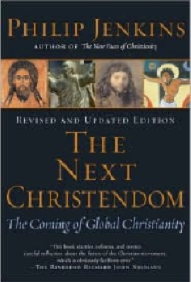 The Next Christendom: The Coming of Global Christianity (Revised and Expanded Edition), by Philip Jenkins

Philip Jenkins is Distinguished Professor of History and Religious Studies at Penn State; the book is published by Oxford University Press. With that set of credentials it’s hard simply to sweep aside the rather astonishing central theses of his book:

“The era of Western Christianity has passed within our lifetimes, and the day of Southern Christianity is dawning. The fact of change is itself undeniable: it has happened, and will continue to happen.”

There is a worldwide sociological shift going on virtually unnoticed even by Christian historians and observers. It is perhaps most strikingly highlighted by:

The theological coloring of the most successful new churches reminds us once more of the massive gap in most Western listings of the major trends of the last century, which rightly devoted much space to political movements such as fascism and communism but ignored such vital religious currents as Pentecostalism. Yet today, fascists or Nazis are not easy to find, and communists are becoming an endangered species, while Pentecostals are flourishing around the globe. Since there were only a handful of Pentecostals in 1900, and several hundred million today, is it not reasonable to identify this as perhaps the most successful social movement of the past century? According to current projections, the number of Pentecostal believers should cross the one billion mark before 2050.

But the book is not entirely about Pentecostals, and it is not entirely about the movement of Christianity south from Europe and North America. Jenkins explains how Christianity is in many ways returning to its homeland. Founded in the ancient near east, its earliest reach was greater toward the south and east than northwest into Europe. Jenkins’s definition of Christianity is broad, encompassing notional believers (i.e., “Christians” ranging from genuine believers to those whose claim to Christian connections is merely traditional or cultural) in the Roman Catholic, Protestant, Orthodox, Coptic, and Ethiopian traditions, and even Indian churches tracing their roots to the apostle Thomas, and heretical branches like the Nestorians.

It’s a broad perspective, yet this is still a surprise:

On balance, I would argue that at the time of the Magna Carta or the Crusades if we imagine a typical Christian, we should still be thinking not of a French artisan but of a Syrian peasant or Mesopotamian town-dweller, an Asian not a European.

Which leads to the provocative suggestion,

A powerful social movement has demeanded that the West and specifically the churches apologize for the medieval crusading movement. In this view the Crusades represented aggression, pure and simple, against the Muslim world…. An equally good case could be made that the medieval MIddle East was no more inevitably Muslim than other regions conquered by Islam and subsequently liberated, such as Spain and Hungary…. Westerners have simply forgotten the once-great Christian communities of the Eastern world.

To which I plead guilty, in spite of having studied church history in school and having read Latourette’s 2-volume history of Christianity. In fact, all through this book I was confronted with completely new information, to a most humbling extent. I work in a mission agency–mostly on the U.S. side of the work, but I still get worldwide reports. Yet I still have had nothing at all like a true conception of what God is doing all over the world.

Bearing in mind Jenkins’s broad definition of Christianity, here is the picture as it was in 2005 and is projected to be in 2025 (based on figures on page 2): 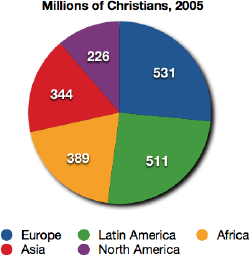 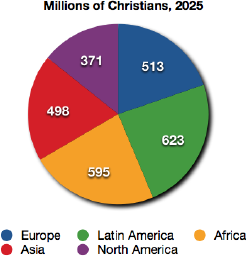 The figures total 2.1 billion Christians in 2005, and some 2.6 billion about 17 years from now. North America and Europe already comprise only 38% of Christians; in a few years that will drop to 34%. Europe is now the most populous Christian continent, but it is also infamously the most nominal Christian region of the world. A count of those who consider themselves Christian by more than cultural heritage would drop their percentage by at least 80% to 90%. Churches in Latin America, Asia, and Africa, on the other hand, are thriving.

Southern Christianity tends to be considerably more conservative theologically than northern. This, at least, has hit the major media, as African Anglican Church leaders have made their opposition to liberal social practices strongly felt. They are far more likely to be Pentecostal. They expect God to work in signs, wonders, and visions–and they see it happening. Latin America is becoming more Pentecostal than Catholic. They are sending missionaries north and west. The largest church in London today is led by a Nigerian pastor. They are struggling for elbow room with Muslims, and often, as in Darfur and previously in Rwanda, suffering incredible persecution. They are the face of Christianity, far more so than one like me.

This can only be heartening for those of us who have dreamed of and devoted our lives to sharing the message of Jesus Christ with everyone around the world. Heartening–and humbling. God is at work. Those of us standing far out on the fringes of Christendom–like myself, here in the virtual Bible Belt area of Virginia, U.S.A.–hardly have a clue.

The Next Christendom: The Coming of Global Christianity (Revised and Expanded Edition), by Philip Jenkins. Oxford: Oxford University Press, 2007. 261 pages plus 45 pages of endnotes, plus index. Amazon Price US$14.95

5 thoughts on “The Next Christendom: The Coming of Global Christianity (Revised and Expanded Edition)”