What Christ Does For Us, Part 6: Among Us, Loving Us

The stage has been set in Parts 1 through 5 (linked below). The human race, meant to be great under God, in worshipful relationship with Him, has fallen mightily by rejecting that relationship. God did not reject us, though. The plan was prepared since before the foundation of the world: Jesus Christ, God Himself, second Person of the Trinity, maker and sustainer of all creation, would come and provide our rescue. His coming was prophesied centuries in advance, here and in many other places:

For to us a child is born, to us a son is given; and the government shall be upon his shoulder, and his name shall be called Wonderful Counselor, Mighty God, Everlasting Father, Prince of Peace. Of the increase of his government and of peace there will be no end, on the throne of David and over his kingdom, to establish it and to uphold it with justice and with righteousness from this time forth and forevermore. 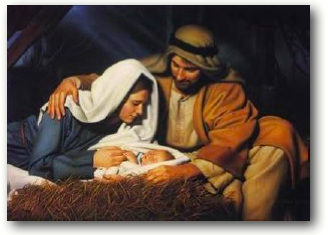 Thus this glorious King and and Deliverer comes and breaks into our world–helpless and tiny, lying in a feed trough in a stable.

Nobody ever said Christianity was without paradox and surprise. This is one of the greatest of them. God humbled Himself to become one of us, far more truly so than anyone had ever anticipated. The image here well conveys the stunning reversal. He came because of His love for us, but the glory of that love is completely veiled, so that what we notice instead is Mary and Joseph’s adoration.

Not all His greatness was darkened when He came. The angels announced His coming to the shepherds in great glory. But this, too, is a reversal. Shepherds were of a class not much more respected than garbage collectors in our day. Why did God grant them this great privilege?

One author called Jesus’ rule the “Upside-Down Kingdom,” where humility reigns and the proud fall. This upside-down-ness of Jesus’ way began right at His own beginning on Earth. He laid aside His divine privileges, and as we saw in Part 5, became united with humanity.

His joining with us would extend to growing up and sharing in human joys and grief, in laughter and in pain, in weariness and refreshment, in friendship and in rejection. Ultimately it would extend to experiencing what none of us should ever face, though too many have: immense injustice, torture, and death.

What Christ does for us is love us intimately, from nearby.

4 thoughts on “What Christ Does For Us, Part 6: Among Us, Loving Us”