The NAS on Science, Evolution, and Creationism 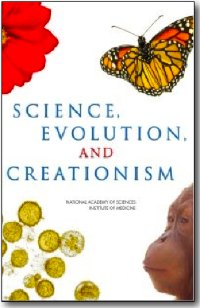 Science, Evolution, and Creationism, richly illustrated and printed on glossy stock, is a marvelous scientific defense of evolutionary theory from the National Academy of Sciences. If that were all it tried to accomplish, it would be quite a fine little book (just 54 pages plus bibliography, index, and author bios). What it attempts to do instead, though, is to show the compatibility of religion and evolution, and the utter worthlessness of Intelligent Design and other “creationisms.” Like so much else that has been written on this topic, it oversimplifies in some places, misrepresents in others, and is thoroughly wrong in others. It’s hard to know where to begin addressing it all.

I’ll dive in with this from page 37, the opening words of a chapter titled “Creationist Perspectives.” Several of the book’s major distortions crop up in these two-plus paragraphs:

Advocates of the ideas collectively known as “creationism” and, recently, “intelligent design creationism” hold a wide variety of views. Most broadly, a “creationist” is someone who rejects scientific explanation of the known universe in favor of special creation by a supernatural entity. Creationism in its various forms is not the same thing as belief in God because, as was discussed earlier, many believers as well as many mainstream religious groups accept the findings of science, including evolution. Nor is creationism necessarily tied to Christians who interpret the Bible literally. Some non-Christian religious believers also want to replace scientific explanations with their own religion’s supernatural accounts of physical phenomena.

In the United States, various views of creationism typically have been promoted by small groups of politically active religious fundamentalists who believe that only a supernatural entity could account for the physical changes in the universe and for the biological diversity of life on Earth. But even these creationists hold very different views. Some, know as “young Earth” creationists, believe the biblical account that the universe and the Earth were created just a few thousand years ago. Proponents of this form of creationism also believe that all living things, including humans, were created in a very short period of time in essentially the forms in which they exist today. Other creationists, known as “old Earth” creationists, accept that the Earth may be very old but reject other scientific findings regarding the evolution of living things.

Defining Terms
In any social or political discourse, being successful at defining vocabulary is the equivalent of taking the high hill in military battle. If you can pin an emotionally laden label on your opponent, you can cut thinking short. That’s why abortion supporters won’t use “pro-life” for their opponents, but label them “anti-choice.” A “creationist,” the NAS says, is “someone who rejects scientific explanation of the known universe in favor of special creation by a supernatural entity.” They don’t mention that “creationist” has a history of anti-intellectualism and poor science, but they do toss in some great buzzwords: “politically active religious fundamentalists.” Yes, indeed.

Intelligent Design could be considered anti-science on one definition. On page 10 the book says, “In science, explanations must be based on naturally occurring phenomena.” That’s a perfectly sound and true statement, except that it’s used immoderately, with an assumption that explanations must be scientific to be of value. I’ve never read any ID author even hinting that scientific explanations be sought and applied in every conceivable circumstance; but they reject the view that every explanation must be based on naturally occurring phenomena, on grounds that there could be some causes that are not natural. This is the distinction between philosophical naturalism (or materialism) and a broader view that refuses to suppose that nothing exists besides matter, energy, and their law- and chance-based interactions.

So if one equates disagreement with naturalism to being “anti-science,” then much of ID is anti-science. That’s rather a twisted perspective, however. It’s like saying I’m anti-books because I believe I can read, enjoy, and learn from sources outside the bound, printed page.

I it cannot yet be a legitimate scientific finding that all life came about on Earth by strictly material, natural causes. Science can and does show the relatedness of all life. From there, the inference of common descent is a reasonable one to make (disputable on some grounds, yet certainly reasonable from the scientist’s perspective; more on that in a future blog posting). The further inference they want us to make, that common descent happened entirely from within a closed system of natural cause and effect, is philosophical and theological, not scientific. This is because the methods of science restrict it to knowledge of what happens within its sphere. If there is anything happening outside that sphere, science does not have the tools to comment on it.

Compatible With Politics, Too

“As was discussed earlier, many believers as well as many mainstream religious groups accept the findings of science, including evolution.”

The earlier discussion referred to was intended to show that religion is not incompatible with evolution. I don’t know anybody, though, who believes in religion. I know people who have very specific beliefs about the nature of God, His work in the origin of the universe, His relationship to people, and the like. Some of them agree with evolution in all its materialist glory, some accept theistic evolution, some who remain uncommitted, some are ID proponents, and some are young Earth creationists. I struggle with understanding the value of showing, as this book attempts to do, that evolution is compatible with religion. You might as well say it’s compatible with politics.

The only conceivable purpose of this could be to try to persuade readers to change their religious beliefs. There’s nothing wrong with that in general, but in this instance it’s another example of the immoderacy of science. Certainly my beliefs take scientific evidences into account; that’s why I’m not a young Earth creationist (there are Biblical reasons as well). To suppose that readers will alter their beliefs only on account of science, however, is presuming far too much. Our beliefs take in far more than that: history, philosophy, personal experience, God’s revelation, and more.

Just a Couple of Paragraphs
In just two-odd paragraphs we see several confusions and distortions. I’ll write further on this later, for these are not all that there were.

Let me reiterate, though, what I said so briefly earlier: the explanation of evolution in this book is excellent. I am strongly encouraging my two children to learn as much as they can about evolution, including the arguments in its favor. Even if it’s wrong, it’s essential education. You could say the same about the Bible–though I obviously I wouldn’t agree that it’s wrong. Both evolution and Bible are essential parts of the intellectual landscape in the Western world, and they are both mighty forces to contend with. If this book was intended to bring some reconciliation between people who reject one or the other, it has unfortunately not done the work necessary to succeed.

16 thoughts on “The NAS on Science, Evolution, and Creationism”