“Buyer Beware: Finding Truth in the Marketplace of Ideas”

For Pastors and Teachers
0 Comments 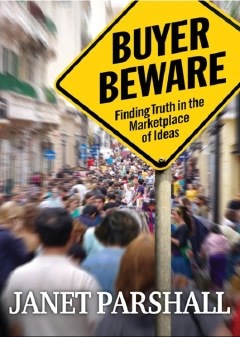 I’ve had several conversations lately about the strange situation of worldview and apologetics in today’s world. We live in a golden age of apologetics: every hard question for the faith now has a strong, credible, rational answer. I’m not saying that every question has an answer that forces assent; it’s still possible to disbelieve, as I am sure it always will be until Christ returns. What I mean is that it’s possible to believe on good evidential and rational grounds. Something similar is true for worldview issues: we have excellent work on virtually all fronts.

Yet oddly the Church remains virtually untouched by it all. Pastors and laymen are as little equipped as ever. One reason for this, as I’ve come to find out by asking people in a position to know, is that too little of the available knowledge has been translated to a level suitable for everyday use by everyday Christians. Janet Parshall’s new book Buyer Beware: Finding Truth in the Marketplace of Ideas is a welcome exception.

The book begins with John Bunyan, author of Pilgrim’s Progress, and it touches base frequently with his character “Christian’s” journeys in that great classic, with special attention to that old marketplace of ideas, “Vanity Fair.”

While the author relies on that timeless classic to provide an organizing theme, she keeps her analysis focused on the present. She explores whether our purpose as Christians includes influencing the spheres of culture and politics, and concludes that even though there may be challenges, as there were for the prophet Jeremiah, we are indeed called to be involved there. She treated the story of Paul’s imprisonment, for example (Acts 16, esp. vs. 37), in a way I had not previously heard or thought: “Just as Paul had preached the Gospel, he likewise desired to expose his unlawful imprisonment as well—in other words, cultural engagement.”

She moves on to discuss economics, the home, family, marriage, life for the unborn, women’s roles, building culture, various religions, and more, all of it from a solid biblical perspective. Janet Parshall is clearly at home with her material, and more importantly, is able to make the reader feel increasingly at home with it. It’s all about the vast and complicated “marketplace of ideas,” and sorting out what’s true there.

The material is introductory, not advanced, but we need that. I could easily see a small group using this as a starting point for learning about these topics, and then moving on to more in-depth material—or maybe even to Pilgrim’s Progress, which wouldn’t be a bad next step to take.

And here’s another idea specifically for those of you who are comfortable with more advanced material. Chances are there is at least one important person in your life who doesn’t quite “get it.” I know a lot of people say their spouses aren’t much interested in worldview or apologetics; or it could be another family member, or a Sunday School teacher. You could mark this down as another good Christmas gift idea, to help get them started. It’s a quick read and it covers the territory broadly if not deeply. I think they’ll like it; and I think it might open up new points of connection for you with them. I have someone like that in mind myself, and I’m glad I have this book to share with them.